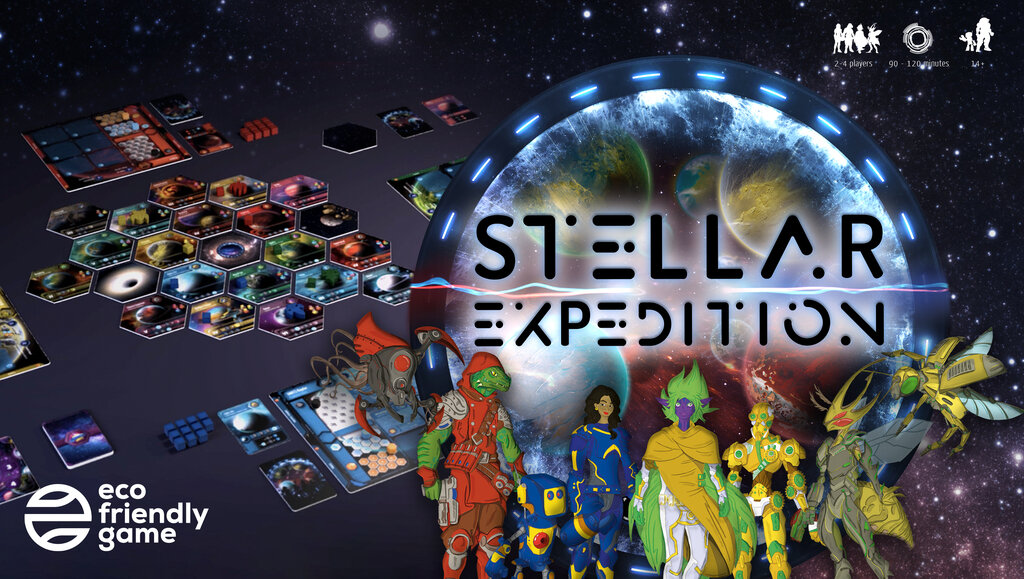 Is there a solo mode in the game? UPDATE

Yes! There will be a solo mode!

There has been a lot of questions about this in the last few weeks. And as I mentioned before, I really want to make this a reality in the future. Well I can tell you that we have some cool ideas for a solo mode! Stellar Expedition really lends itself well for solo play. We are still in the development phase now, but the solo mode will be ready and available free as a print&play before the game will ship out to you.

Our ideas don’t change the base game. We will need to take out a few cards in solo mode, but those will be clearly labeled. The rough idea is that you will need to race against your AI � opponent to get the most Exploration Points at the end of a certain round. You can play a long game over 8 rounds, or a shorter expedition in 4.

The AI player � will have two small decks of cards for movement and actions. They can still build embassies, buy upgrades, place tiles etcetera. Depending on the difficulty, the AI also has missions cards it can fulfil. Other than with human players, where the missions depend on Crew members, Embassies etcetera, for the AI it is based on time and location. Can you be faster than the AI and go back through the gate before it closes again?

Since we are still in early development, thing might change in the future. And I also love to hear from you what you want in a solo mode. Which solo games do you enjoy? What mechanisms are interesting to you? Let’s develop this together.

When the demand is high enough, I will look into a print run instead of only print&play or adding it to the base game, but that all depends on the goals we will reach at the end.

What about adding more players?

Stellar Expedition lends itself well to adding new faction, locations and crew members in the future. For now I choose a maximum of 4 players for several reasons. I want to create a solid, fun and balanced experience for 2, 3 or 4 players. While also keep the cost for the base game down to an affordable price. Adding extra players will upset that process at this point.

I also would really like to add an expansion for 5 and 6 players in the future, but I want to do this together with you all. What would you like to see added to the game? Player feedback is really important to me. I want to know what you want before I throw a lot of stuff into the box that ends up not being used in play that much.

Will the game be available in different languages? UPDATE

I really want to be able to translate my game in different languages, but to be frank this is simply too expensive at this point. When the demand is high enough for a certain language and I have exceeded my goal, then I can look in to it.

Is Stellar Expedition a 4X game?

No, it is not. Well, at least not really. First and foremost it is a space exploration game. You and your opponents lay locations out on the table during the game and explore space together.

It is true that you eXplore & eXpand. But there is no real eXploitation or eXtermination. Building is only part of the fun in the game. The main reason why you build embassies is to recruit new crew members in the form of cards.

You won’t go around and destroy each others embassies and spaceships. It’s not that kind of game.

BackerKit is a service that crowdfunded project creators use to keep track of hundreds to tens of thousands of backers—from shipping details, pledge levels, preferences and quantities, whether they have paid or had their card declined, special notes, and everything in between!

The BackerKit software and support team is independent from the campaign’s project team—BackerKit does not handle the actual reward shipping. For more information about the preparation or delivery status of your rewards, please check the project's updates page.

How does BackerKit work?

After the campaign ends, the project creator will send you an email with a unique link to your survey. You can check out a walkthrough of the process here.

I never received my invitation. How do I complete the survey?

The most common reasons for not receiving a survey email is that you may be checking an email inbox different from the email address you used to sign up with Kickstarter, Indiegogo or Tilt Pro account, or it may be caught in your spam filter.

Confirm that the email address you are searching matches the email address tied to your Kickstarter, Indiegogo, or Tilt Pro account. If that doesn’t work, then try checking your spam, junk or promotions folders. You can also search for "backerkit” in your inbox.

To resend the survey to yourself, visit the project page and input the email address associated with your Kickstarter, Indiegogo or Tilt Pro account.

How do I update my shipping address?

When will my order be shipped, charged or locked?

That is handled directly by the project creator. BackerKit functions independently of the project itself, so we do not have control of their physical shipping timeline. If you want to check on the project’s status, we recommend reading over the project's updates page.

I completed the survey, but haven't received my rewards yet. When will they arrive?

As BackerKit does not actually handle any rewards or shipping, the best way to stay updated on the shipping timeline would be to check out the project's updates page.